You are here: Home / Crafting / How to make a Quick and Easy Pom Pom Garland

Learn how to make a quick and easy pom pom garland including how to make fluffy pom poms from simple yarn (without a pom pom maker).

I loved the pom pom garland I made for Christmas this year so much, I decided to make another one to add a bit of coziness to carry us through the rest of winter. 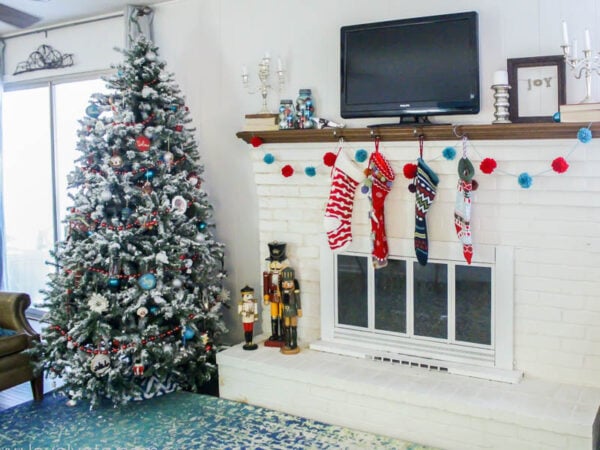 Pom pom garlands are perfect for decorating a Christmas tree, draping over a mantel, or just adding a bit of personality to a boring corner.

Pom pom garlands are super cheap and easy to make. You can make one with no special tools other than some yarn, your hands, and a yarn needle. 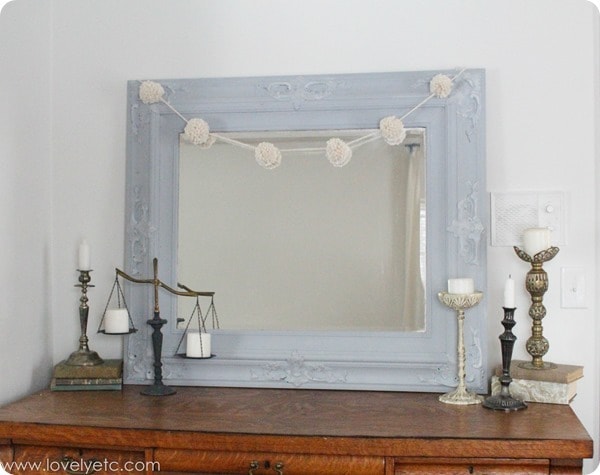 This post contains affiliate links which means if you make a purchase after clicking a link I will earn a small commission but it won’t cost you a penny more.  Click here to see my full disclosure policy.

How to make pom poms

You can make pom poms from any type of yarn, but I like using really thick, fluffy yarn to make nice, full pom poms. 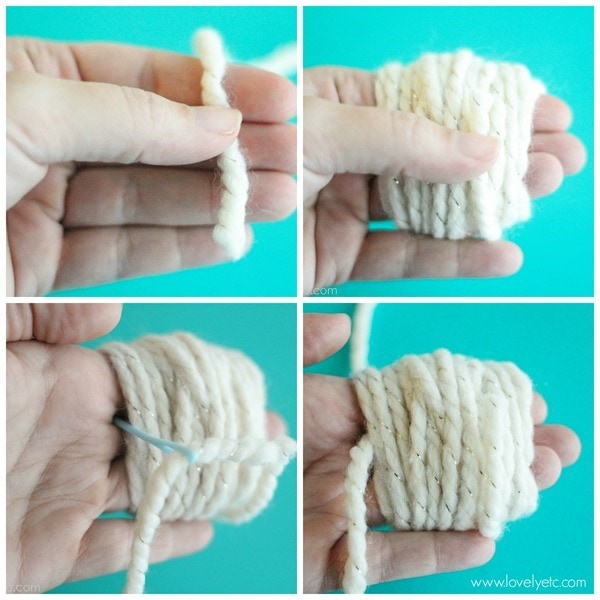 Cut a second piece of yarn around a foot long and thread it onto your yarn needle.  Push the threaded needle between two of your fingers, below where the yarn is. 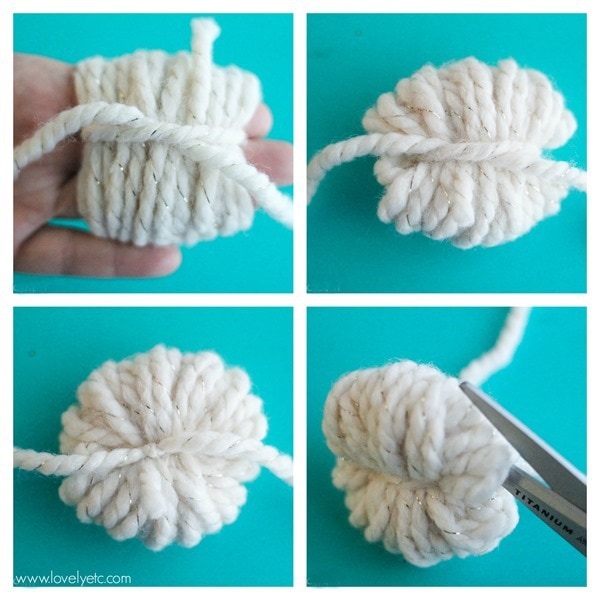 Pull the threaded needle out the back side and then wrap the two ends of the piece of yarn around the wrapped yarn. Tie it loosely and slip the whole thing off your fingers.

Pull the tied piece of yarn as tight as possible and tie a double knot.

Use your scissors to cut the loops of yarn all around the pom pom. 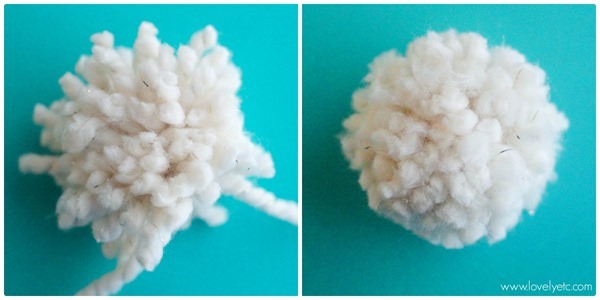 When you fluff it up, it will look super scraggly. Just use your scissors to trim it into a nice round shape.

Because I’m a total perfectionist, I decided to do a little pom pom experimenting. Using pretty much the same method with a few minor tweaks, you can make your pom poms big, little, shaggy, fluffy, basically whatever you want.

First I experimented with making different size pom poms by wrapping the yarn around different number of fingers. I made small, medium, and large pom poms using two, three, and four fingers. 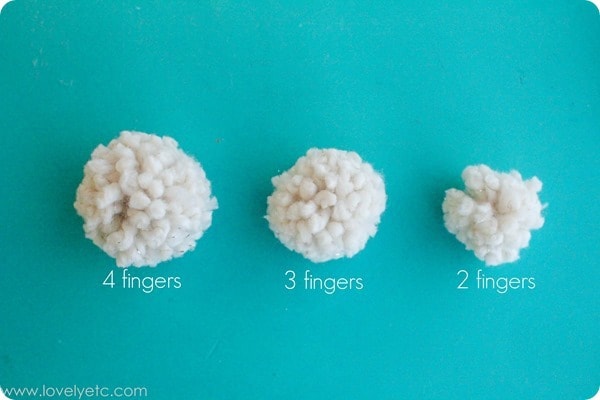 Then I tried wrapping the yarn around my fingers different amounts of times – 20, 30, 0r 40. (All using three fingers). 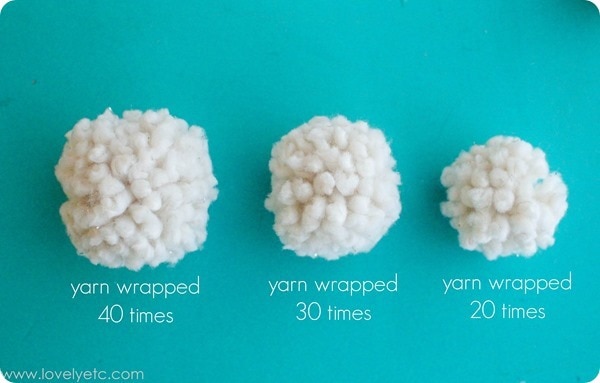 Wrapping the yarn 30-40 times looked best in my opinion.

And finally I experimented with trimming the edges different amounts. Less trimming makes a bigger but shaggier pom pom. More trimming makes it a bit smaller, but much more uniformly round. 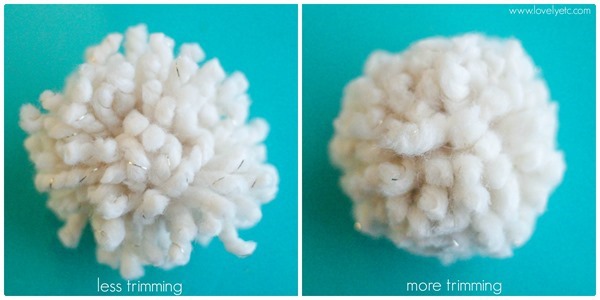 In the end I made the pom poms for my garland using three fingers, wrapped 30-40 times. (I’m not crazy enough to count every single time – I just eyeballed it.)

How to make a pom pom garland

Turning a pile of pom poms into a garland is super easy.

Just thread the yarn needle with a long piece of yarn. String the pom poms onto the yarn by sticking the needle through the middle of each pom pom.

Once the pom poms are strung into a garland, you can slide them along the string until they are evenly spaced. 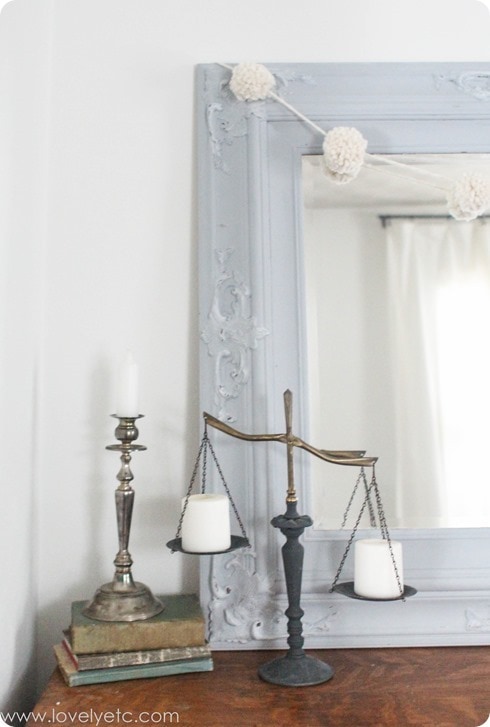 I hung my fluffy pom pom garland on a mirror in our dining room and I love the cozy, wintery touch it adds. 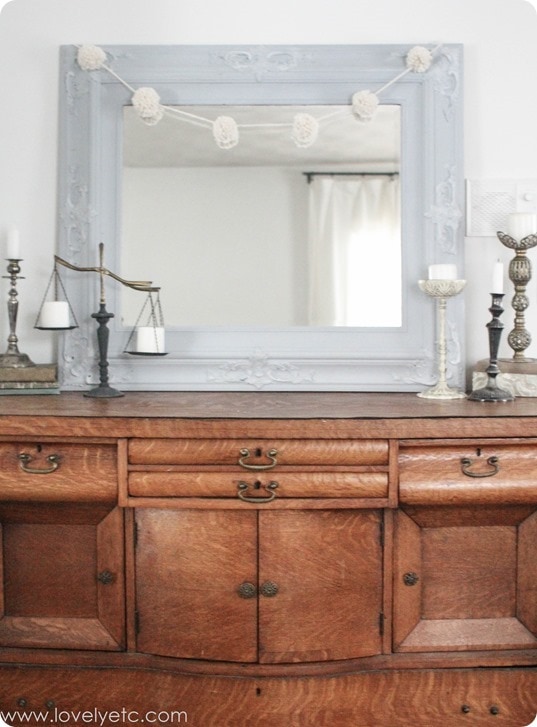 As an Amazon Associate and member of other affiliate programs, I earn from qualifying purchases.

Did you make this project? 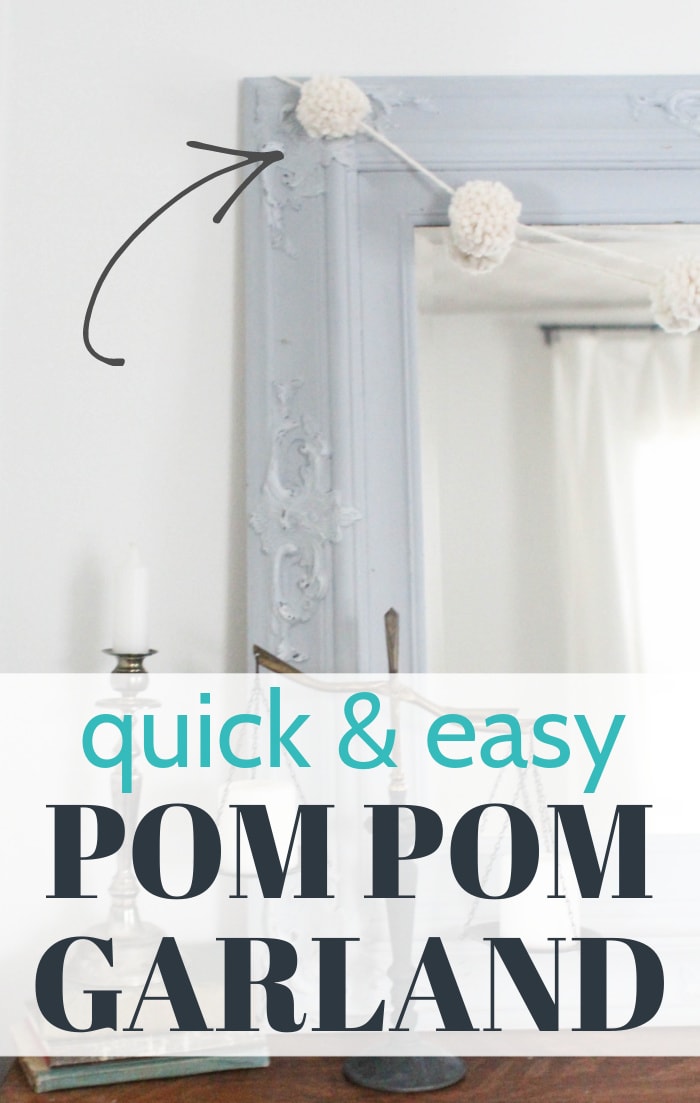 Interested in other quick and easy projects to brighten up your winter?  I’ve got you covered.

Quick and Easy Winter Wreath Made from an Upcycled Scarf

How to Make a Fairy Light Lantern in 5 Minutes

« The #1 Reason We Fail at Decluttering
Quick guide: Selling clutter fast on Craigslist »